Welcome, Robin to the Blog World of Kat Yares.  I'm sure I'm not the only person who is absolutely going to love what you have written here.  Personally, I love mythology. 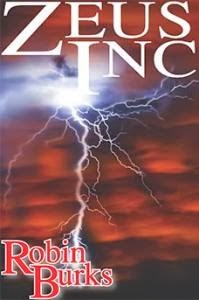 I am certainly not the first author, nor will I be the last, to use mythology in fiction. Mythology has long inspired novelists, and its usage includes such works as Neil Gaiman’s American Gods and Rick Riordan’s Percy Jackson series, just to name a few. But what is it about mythological gods, goddesses and creatures that inspires us?

Mythology is the truest form of the fantasy genre. Thanks to wonderful tales given to us by the Greeks, the Norse, the Celts and other ancient civilizations, the stories are already there. However, those of us who wish to retell them need to take what we know and build upon that. It gives us a way to re-invent old stories and make them new again. The inspiration that these stories give to an author is invaluable.

Mythology also gives us characters that are fascinating. Mythology gave us our first superheroes: beings that were far more than their mortal counterparts. Whether they be humans with extraordinary powers or gods and goddesses, these beings are able to do things that mere humans cannot. That in and of itself makes them interesting characters. But even better? These characters aren’t perfect. In fact, they often succumb to very human weaknesses: anger, jealousy and love. They might be infallible, but they are also flawed. And most authors understand that a flawed character is more interesting to read about than a perfect one.

Mythology also gives us fantastic monsters. Think of something like Cyclops: a giant with one eye. He is absolutely terrifying! An author can imagine how a modern-day character would react upon meeting such a beast. These ancient monsters offer a great horror element to storytelling that many authors have embraced.

I embraced mythology in writing Zeus, Inc., for all these reasons. I have always been intrigued with the Greek gods and goddesses and when it came time to write a story about them (after an interesting dream about a world where they existed), I could not stop myself. They served as my inspiration and became characters in a world that I created. I cannot imagine my made-up universe without them.

Don't miss the Zeus, Inc. Blog Tour giveaway. You could win ebook copies of Zeus Inc. , along with a $25 Amazon gift card. Even better? Winning is easy: see details on how to enter below.

To be entered to win:


About Zeus, Inc.
(Biting Dog Publications) - 50 years ago,  mysterious Zeus, Inc. CEO Joseph Brentwood saved the world from a major energy crisis by discovering a new unlimited energy resource. Now, in 2069, Mr. Brentwood has gone missing and private eye Alex Grosjean has been hired to find him. Alex’s search leads her through her own murky past and into the fantastical depths of Hell itself, where she discovers that no one is who or what they seem to be.
Robin Burks is not only a journalist for DVICE.com and RebelGaming.com, but also for her own site FanGirlConfessions.com. Robin has just published her first novel: Zeus, Inc. with Biting Dog Publications and is working on its sequel The Curse of Hekate. A science fiction trilogy, The Book of Revelations, is also currently in the works. An internet addict, she can often be found on Facebook, Twitter and Google+.  She also loves to read , act, sing, play video games and travel. Robin currently lives in Missouri with her four cats. She also occasionally speaks French and loves Doctor Who. Visit Robin on her website, Twitter, Facebook, Google+ or GoodReads.
a Rafflecopter giveaway