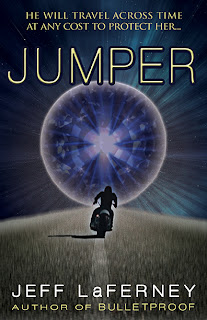 Title: Jumper (Time Travelers)
Author: Jeff LaFerney
Publisher: Tower Publications
Publication Date: April 30, 2013
Genres: NA, Action/Adventure
SUMMARY
After spending three years in jail and others completely alone, twenty-four-year-old Cole Flint discovers an amazing ability—he can time-travel and teleport. He’s a jumper. So what should the motorcycle-riding, cage-fighting tough guy do? He should protect an innocent eighteen-year-old girl who happens to be in possession of the Staff of Moses. Following the direction of a trio of angels who are determined to shake things up in the Middle East, Cole pairs up with Hannah Carpenter and her pet grizzly while he also tries to change his past and learn the mystery of his birth. Curiously, the King of Jordan knows all about Hannah, and he’s determined to gain possession of the staff. He’ll do anything to possess its power, but is it possible that he’s no more than a pawn, manipulated in time along with Cole and Hannah? Jumper is a mysterious roller coaster of action and a time-traveling adventure that will keep readers guessing right to the very last page. 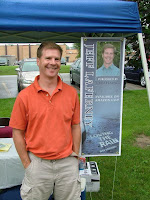 Jeff is currently an 8th grade English teacher for Davison Community Schools. He coached for 25 years. In the past three years, he stopped coaching and has published three mystery/suspense novels. Loving the Rain, Skeleton Key, and Bulletproof are three stand-alone novels featuring Clay and Tanner Thomas. A fourth novel, a time-traveler action/adventure called Jumper was published on April 30, 2013. Jeff loves sports, reading, writing, and spending time with his awesome family.
AUTHOR LINKS
Blog     *     Website     *     Facebook     *     Goodreads     *     Amazon
Posted by Unknown at 6:00 AM No comments:


Yep, it's another one of those self-interviews, but I was asked by Mandy DeGeit to do this, so here I am.  Was also supposed to get three other people to sign on for next week, but, alas, two more was the best I could do.  So without further ado - here's my latest rumblings and mumblings.

What are you working on right now?

A dystopian novel set in the near future.  It is tentatively titled Party Lines and uses the locations and some of the people established in my novella Vengeance Is Mine.

How does it differ from other works in its genre?

Unlike many dystopian novels I've read - the story line of Party Lines is not very far-fetched considering today's political climate.

What experiences have influenced you?

Everything I've done, everything that has been done to me tend to show up in my stories.  What I write allows me to confront the demons or the demonized and work it through in my own brain.

Why do you write what you do?

I try to write the story I want to read.  For me, it's a way of figuring out what is happening in the world around me - whether that be a real or imagined thing.

How does your writing process work?

Idea, notes, research, plot, plan, write.  Basically in that order.  Then comes revise, rewrite, edit, rinse and repeat several time.  Pass the story on to my beta reader and then to my editor.  Rewrite and revise after each until it is the best story I am capable of writing.

What is the hardest part about writing?

I think if you ask any Indie Author - the writing is the easy part.  Editing is a booger for many, but I think the hardest part is the promotion.  Trying to get your work in the hands of those readers who will enjoy it the most.  That's the hardest part.

What would you like to try as a writer that you haven't yet?

I think I've tried writing in most genres already (except romance).  Some I've done well at (horror and thriller) other's like sci-fi, I've completely failed at writing anything coherent.  But everything I've tried has helped me grow as a writer - even if much of it will never see the light of day.

Who are the authors you most admire?

In the traditional world, there is of course Steven King, Robert McCammon, the late Michael McDowell, Margaret Atwood and Anne Rice to name a few.

In the Indie world, the first person to come to mind is Billie Sue Mosiman.  Not only can she tell one hell of a story, she's also prolific and helpful to those of us that are new to this whole publishing world.  She my hero and my friend.

Who are new authors to watch out for?

Snakes in the physical world (even in the nightmare world) - can't look at them on TV, in Books and will almost throw the laptop across the room when someone I'm friends with on Facebook posts a picture of one and it appears in my feed.

In the mental world - Alzheimer's - to lose my sense of self, I think would be the worst horror that could happen to me (or anyone else).

Look next Wednesday for posts from these fellow horror authors.

Posted by Unknown at 5:23 AM No comments: