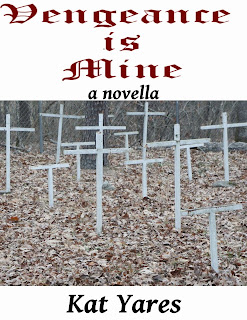 When I first began writing my novella, Vengeance Is Mine, I tried to put my female characters into the worst possible situation I could think of.  And the situation was bad, women trapped into a Christian cult where the men ruled with iron fists.  They had no rights, no hopes, no dreams of ever escaping the men that ruled over them.  I never dreamed of a world as bad as the world I had created.  At least not until lately.

What I've seen since before last November's elections is a group of angry (mostly white and rich) men declare War on Women.  I am so ashamed of the legislature of my home state of Arkansas passing laws that are not only unconstitutional, but making women once again chattel subservient to their demands.

I see a Federal Congress where the Republican majority thinks it's just fine to hit a woman - all because the Violence Against Women Act included Native American Women as well as Gay, Lesbian and Transgendered people.  138 Republicans, including all from my home state, voted against this - effectively saying, Beat Your Women - It's okay by us.

While I have tried to stay out of Politics, I feel I can no longer do so.  Any form of Rape is a REAL RAPE.  Abortion is a constitutional right and women should not feel like second class citizens - EVER.  Let's be real folks, abortions are going to happen, no matter how much you try to legislate them away.  Let's not send women back to the dark ages of back alley abortions - where safe and sanitary were not usually the norm.  We have the right to live our lives, safely and peacefully,  just like any man.

If we continue on this path that these so-called "Christian" lawmakers are laying out - I can see the situation in Vengeance Is Mine becoming a reality for many women.  What I don't get, and just can't understand, is how there are so many "Christians" who do not follow the words of Christ.  If they did, none of this would be happening.

We would have no poverty, no homelessness, no hunger.  We wouldn't have returning service men and women living without treatment and losing their homes.  We wouldn't have an elderly population terrified that their benefits (NOT entitlements, since most of have paid into Social Security and Medicare since the day they began working) are going to be lessened or taken away.  No child in this country would go to bed hungry at night or be alone while Mom works two jobs to try and make ends meet.  And if she needed food stamps or other help to make ends meet, we wouldn't classify her a low-life living on the public dole.

What we would have is a country where everyone (including corporations, since they want to be classified as 'people') paid their fair share in taxes .  No one would get 'rich' by being a politician and playing class-warfare games against women or any one else the Right-Wing Christian politicians feel are beneath them.

I'm all for making the United States of America a better place for all of us.  But what is happening is we are allowing a few to dictate to the rest what is good.  And they are wrong.

Vengeance Is Mine is quickly becoming a reality.  And I'm scared.

And before you ask, NO, I've never had an abortion.  I would have never chosen that option for myself no matter how hard things got.  That thought never played in my psyche - ever.  But, that said, it's not my place to decide for other women what is right for them in their situation.  Never.  But, I'm old enough to remember when they were illegal and that didn't help anyone.

And just a mild reality check, in 2012 a report was released by the Children's Defense Fund that showed of over 3400 children in the Arkansas Foster system, only 595 were adopted in 2011.  So don't give me the line about parents waiting to adopt.  Yes, they are out there, but they only want healthy, pretty, little, white infants.  The rest they could not care less about.

Vengeance is Mine is available in paperback from Amazon and Barnes & Noble.  Also available in eBook form where ever eBooks are sold.  Click the Vengeance Is Mine link at the top of the page for buying options.